What a Mistake Cost Us

If you are visiting from the Carnival of Personal Finance at the Ultimate Money Blog, I just want to take a moment to welcome you to my humble abode. Feel free to stick around and check the place out. I'd love to hear your comments on any of my posts. 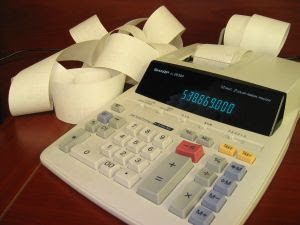 I mentioned in a previous financial update post that we were going to have to send some money to the IRS.

A few weeks ago we got a letter from the IRS telling us that we had failed to report some income in 2008. I immediately went to check on it, but our prior tax returns were locked in our firesafe and Chip was traveling with the key. So I had to wait for him to get home. When he returned, he checked into it and found...sure enough...we had neglected to claim one of our income sources. How is this possible, you ask? I'll give you the only scenario I can imagine to explain....

In 2008 Chip had a couple of different jobs. The problem was that two of his W-2s had very similar amounts on them. I mean...the "thousands" amount was the same down to the "tens" amount.

My only guess is that he picked up the 2nd similar-looking W2, saw the amount, and thought it was the one he had already entered into our tax filing software. He certainly didn't intentionally leave anything out.

What is worse? The reported tax withheld was like $395.00 and was probably close to right. That other almost $1500...fees for the omission and interest that has climbed during the year it took the IRS to find this problem.

And yet worse? We have to file an amended state return for that year and send them some money as well.

Chip was hating himself for it. I totally understand how the mistake could happen, and although I hate to see the money leave the account for something other than debt repayment right now, I know that there is nothing to do about it but send them the money. So I'm not upset about the fact that it happened.

What I have learned through this incident: We really can do this frugality thing. I mean, we lucked up that it happened in a month with three paydays for each of us but one of Chip's was not a full check because he wasn't on a full schedule yet. However, we cut back to just the minimum credit card payments this month and restricted spending to only the necessities.

And we are doing it.

So far, we have eaten out only once...the kids and I visited Chip at his Waffle House for lunch, which is a real treat for the kids (and Chip). It was $19 with tip, so not too bad. And our grocery bill (so far) has not skyrocketed. We are just spending much more purposefully now. And so far I have had to pull only a little out of our emergency fund to cover the IRS payment, and it was only as a precaution (so far). So it appears that we actually might be able to pay $1700 more than the minimums on our credit cards! That would rock if it holes true.

Funny thing is, the stress and frustration of this situation has caused us to realize that we can live like this (because we've had to) and it is not so bad! Maybe it will help us push through more months like this and really make some debt repayment headway!

I wish that has been our last financial mistake. But it isn't. In fact, there is even another one that has reared its ugly head lately.

The latest mistake that cost us money? Totally me. And I am hating myself.

I'll touch on that one next week when I have had time to be not as angry about it.


Photo credit: djshaw
Posted by Kaye at 7:00 AM