Some Tips for Doing Disney World on the Cheap

Our Christmas present to our two kiddos this past year was a trip to Disney World. No, we did not take them at Christmas, we just gave them framed pics stating that their present was a family vacation to the Happiest Place on Earth - set for March 1-5, 2013.  I started typing this as one long post and decided to do two - one with the money info and one with the fun info. =)  Read whichever you'd like - or both if you prefer. =)

We paid for this trip in cash; although we rarely vacation as a family, this was definitely a first.  And let me add here that it was purely REFRESHING to carry cash around all day and know that when we left at the end of the week, there would be no spending regrets, no bills awaiting us at home, and nothing but fond memories to look back on.

Our family of 4 spent four days in the Walt Disney World complex of real estate for only $1500.

Yep. That's all. It included one (relatively) expensive lunch and a costly character breakfast. AND we ended up "blowing" some money in the end because we had it set aside and were allowed to spend it. And I'm about to tell you how we did it. 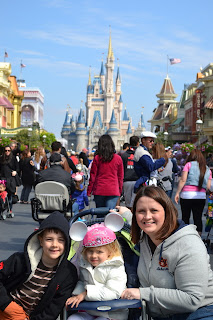 Travel
This one was easy for us. We live a mere 4 hours drive from Orlando, so we did not have to factor in plane tickets or nights in hotels along the drive. I literally worked until lunch and then we left with time to meet up with friends and see their son play baseball and have dinner with them.

And shockingly, because I have such a long commute to work (about 35 miles each way) and the fact that we were only driving one vehicle during those 4-5 days, we actually spent less on gasoline than we do in a typical week, so we actually saved money here too. Crazy!


Lodging
This is one of those decisions that you have to make for yourself. Is it worth it to stay on property and pay a little more, yet have Magic Hours and easy access (no parking fees) to the parks?  Do you want to depend on your off-site hotel's shuttle?  Do you want to pay parking?  We considered several different options. At first, we were planning to stay at Shades of Green, the Disney World resort available to service members and their families. The rates there are lower than the other resorts and based on the rank of the person in the military.  For us, it would have been approximately $90/night or closer to $100/night for breakfast included. Not a bad price.


However, Chip worked in the travel and tourism industry for years and has connections. He contacted a friend who hooked us up with her special rate at an offsite hotel for $55/night. We were less than 4 miles from the gate. The hotel offered a limited continental breakfast for free and a shuttle to the park. We, however, did not want to depend on that shuttle's schedule or reliability, so we opted to pay for parking each day.  It costs $14/day.  Even with parking, we were paying less than $70/night to stay off site, so we decided to go that route.  So four nights at the hotel + 4 days of parking: $266.

Even if you don't have a friend with connections, consider how much you'll spend/save including parking and decide if it is worth your time and money. Totally a personal decision.

Tickets
Here is another savings for military personnel. We purchased our tickets at our local base, but you can purchase them by mail or at Shades of Green with proper identification.  We got four 4-day park hoppers for $156.00 each (add tax if you order them via mail).  Please note that you CANNOT purchase these at the parks, so make sure you have them in hand when you arrive.  Also know that they will take about 10-20 minutes to validate them at the park before the first time you use them. After that, some parks require a special scan of the tickets, but they do that at the turnstiles and there is no hassle.  In fact, the cast members who take them and scan them each time thanked my husband for his service very sincerely, so it was nice.

Food
We were not eligible for the meal plan option that so many people rave about since we did not stay on site, but after looking at our options, I think we ended up MUCH better anyway!  I budgeted $450 for food and we NAILED it!


Our breakfast each morning (with the exception of the character breakfast) at the hotel via the free continental breakfast. Not too shabby and definitely got the job done.

One meal was packed each morning before we left the hotel. Yep - you can take any food or drink inside the gates of Disney as long as it isn't alcohol or it isn't in glass containers.  So we took some groceries from our pantry and made a stop at the grocery store when we arrived and spent $57 on food items. Each day we packed up 5 PB&J sandwiches, crackers, fruit snacks, granola bars, and graham cracker snacks as well as juice boxes and water bottles into two soft-sided lunch bag/coolers with ice packs. Each day we ate these sandwiches as one of our meals, leaving only one meal to be eaten in the park. And you know what - rather than feeling silly for grabbing a bench and snacking on my PB&J, I felt smarter than those around me for saving the money. =)

We did plan two (monetarily) larger meals in the parks.  The first was a character breakfast in Epcot, where we ate with the princesses at the Akershus Royal Banquet Hall in Norway.  Breakfast is the cheapest character breakfast you can do. And it was delicious!  It cost us $125 (plus tip) for the four of us, but I will make two comments about this cost: 1.) it was all about the experience; Abigail's eyes lighting up with each of the princesses was worth it and 2.) they were willing to continue refilling our plates over and over again at no additional charge and they were not trying to run us out - so honestly we COULD have eaten our money's worth if our bodies could have handled it. 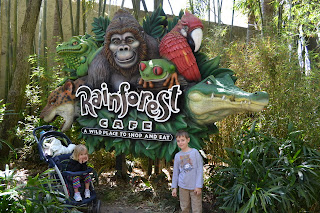 The second larger meal was at the Rainforest Cafe in Animal Kingdom. It is true that you can eat at a Rainforest Cafe in locations other than the Animal Kingdom; in fact, there is another at Downtown Disney. However, our kids had never seen one, so we opted to go to the largest one, located in the park, for lunch. It was a blast. And we HAD to order the $16 dessert, as we were told that we would regret NOT ordering it if we didn't.  It didn't stand a chance against us. We spent a hefty $85 on this meal (including tip) and enjoyed every bite - for me mostly because it was budgeted and I didn't have to worry about it. =)


For all eating, including meals on the road, groceries to pack for the park, hot chocolate in the park for the fireworks, snacks in Epcot, and the big meals, we spent $440 on food.

Souvenirs
We had budgeted $200 for souvenirs. I honestly thought that was overdoing it, but decided to put it there and use any money from this area if we went over our food budget.  Once we saw how well we were doing with our food budget, we decided to let our kids pick one "prize" from each park to take home.  We could have saved more money by not offering this option, but we had it set aside and let's face it - it was a great chance for them to pick out toys, which is not something we typically buy a lot of. 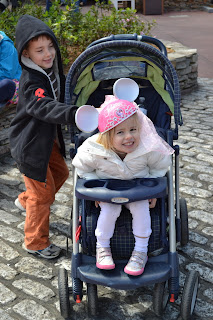 Patrick chose a Perry the Platypus from Epcot ($15), a Yeti from Animal Kingdom ($14) to commemorate his riding the Expedition Everest, a custom-made light sabre from Hollywood Studios ($24), and a Stitch (his FAVORITE Disney character) plush from Magic Kingdom ($25).  Abigail chose an Agent P from Epcot ($15), a Simba from Animal Kingdom ($15), an Ariel/Aurora princess combo doll from Hollywood Studios ($32), and a Merida action figure doll from Magic Kingdom ($22). We also had to buy Abigail some mouse ears (Patrick owned some from his last trip when he was 3), which we spent $21 on, after embroidery.


All in all, we spent $183 on their souvenirs and I must say - it's been almost 2 full weeks and they are ALL still getting played with.  Sure, we could have saved more in this area, but we'd budgeted for it and had the cash in hand for a full four days of memories, so we spent it and enjoyed it!

TOTAL
Add those up, and we spent $1513 on a four-day trip to Disney World complete with exhaustion, sore feet, wind burn (it was unusually chilly when we went), laughs, smiles, characters, joy, exhilaration, and pure awe at the experience.  Since I budgeted $1534, based on known lodging and ticket cost, we will call this a massive success!

I will be posting another one tomorrow and Thursday about Disney tips we used/learned in the process and what to pack (that you might not have thought of).  If you are planning a trip, I hope you have a blast!
Posted by Kaye at 12:00 PM