What Can Harry Potter Teach Us About Money? 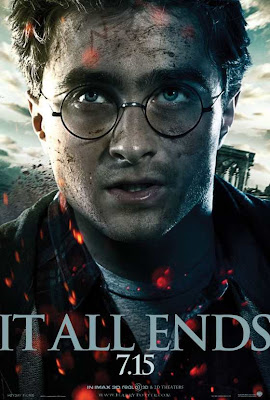 Here on the eve of the release of one of the most highly anticipated movies of a series (a 10-year series, might I add), I wanted to examine what in the world that The Boy Who Lived and his friends can teach us about money.

A stretch? Maybe. But it should at least be fun.

By the way...this post containers no direct spoilers (I'm not going to ruin the last movie for you), but does contain information that indicates some plot lines. If you are avoiding information about the series because you want to discover it yourself, I would suggest reading this some other time.

One of the most surprising parts of this series is Harry’s management of the fortune he discovered he had at 11 years old. What kid at 11 understands that the money will not last forever – especially when discovering that a bank vault full of gold is his alone? Obviously Harry did. Although an unrealistic maturity for a tween, this act indicates that Harry is smarter than the average kid.

Money Does Not Prevent Trouble in Life

Sure, money can buy you out of sticky situations, but it seems that those types of situations never really go away until the problem is truly solved. Regardless of Harry’s fortune, he was tracked for 7 years by Voldemort and no amount of money would have bought safety for him, his friends or his family. He had to address that one head on.

Money Does Not Buy Happiness

The best (and most obvious) example of this is the large and fun Weasley family. With seven children, a stay at home mom and a dad who has a job with a mediocre paygrade, this family could have easily found themselves feeling destitute and complaining. Although Ron did his share of complaining about lack of money that would be typical for a kid his age, the Weasley family as a whole was content. They had large gatherings with family and friends and always, even through horrible times, had an optimistic view of life.

Wealth is Not An Indication of Character

Draco Malfoy was raised in wealth and splendor and could have bought anything the world had to offer, but none of the money his family had could provide him with the character and courage it took to do what was right. In fact, throughout all 7 books he proves to be nothing but a loud mouthed coward unable to save or think for himself.

You Are Not Defined by Your Upbringing

This can be seen in a number of instances. Harry was one of the best wizards the world had ever seen but was raised in an emotional and psychologically abusive situation where his guardians did nothing but berate him. He excelled anyway.

Voldemort grew up in an orphanage with no knowledge of his family for a long time. Although he chose an evil path in life, there is no doubt that he because one of the most powerful of his kind in history.

Sirius Black was raised in a snooty, pureblood family who had evil tendencies, but he turned out quite down to earth and shook off the notion of superiority.

And getting back to finances: Fred and George Weasley became quite successful businessmen who could afford lavish items despite their humble childhood.

Despite her Muggle upbringing, Hermione Granger was one of the most thoroughly read and informed witches that Hogwarts had ever seen. She did not learn magic from her family, as many of the students had (and had taken for granted) but studied hard to become great. Late nights of studying, obsessive reading, and taking huge course loads of classes along with her desire to learn made her one of Harry’s most valuable assets.

Fred and George spent most of their time at Hogwarts creating new tricks and pranks, doing market research by the way of paying underclassmen to let them experiment on, and selling items on the side. This would eventually lead to them doing what they truly loved.

Gambling is Not a Good Source of Income

During the 4th book we see crowds of people heading to the Quidditch World Cup. During the festivities, the Weasley twins bet on the outcome of the games using their life savings. Although they predict the end of the game perfectly, they are never paid their winnings, as the swindler of a “bookie” chastises them for being too young to gamble and refuses to pay out.

After the TriWizard tournament was over and Harry had been awarded the prize of 1000 Galleons, he did not feel right about taking it. He tried to offer it to Cedric’s parents, but they refused it. So he ended up giving it to the Weasley twins to use for their business venture. Later, when Harry saw how that investment had helped then (and yes, they did thank him for it), he felt good about giving it to them to help them out.

You Can’t Take it With You

The final war between good and evil leaves a wake of carnage behind. In the end young and old, rich and poor, wise and foolish – so many don’t make it out alive. All of the wealth in this world could not save them from the certainty of death. Make sure the legacy you leave behind is more than a bank account balance.

So we had a wonderful three-day weekend. We went to a first-birthday party of a neighbor, spent time at the community pool, watched movies, grilled out, played outside, and colored inside, among other things.

What did we not do?

Well, since the internet went out sometime Friday evening for the entire community (and is still out), I haven't checked my personal email, my Facebook page, wasted time online or even blogged. In fact, the interent still isn't up as I write this on Tuesday afternoon from work (during my break, mind you).

Additionally, our TV went out on Sunday afternoon. The dish connection, this is. So we watched some DVDs that have been collecting dust on the shelf, rented a couple of new ones for $1 each (for when it was too hot to go outside), and enjoyed the silence.

Yesterday was the kids' first day at home with Chip (no more daycare until further notice). What did they do? They went to the library, played at the park, and enjoyed time together.

Lots of children's laughter has occurred and has been noticed more in the last few days because we haven't been filling our lives with other noise.

What would you do with a few days of diminished technology offerings?
Posted by Kaye at 7:00 AM No comments: