We're almost done with our Harry Potter party series (see previous post here), but we do need to discuss the games that were played. It was a lot of fun.

I intended on having a game of Stomp the Dementors (scroll down to games - you'll probably see lots of other great ideas here), which would have been a way for the kids to run about and let off some of that sugared-up energy, but leading up to the party I ran out of time and didn't have time to create the dementors.

So we just let them run about like crazy little creatures and play with their wands for a little while.  This was a lot of fun for them and a great way to just let them be as creative as they want. 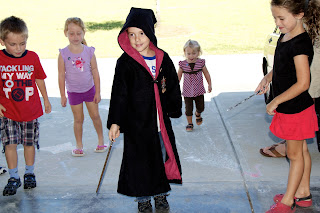 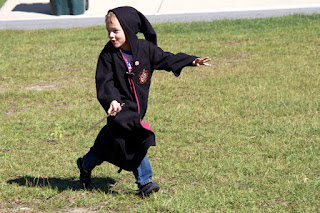 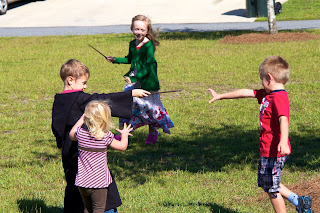 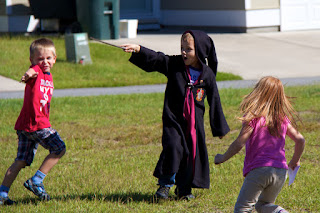 After that, we had a Horcrux Hunt.  This was my second most proud moment of creativity for this party (following the Potions class).  A basic scavenger hunt, I wanted to create a Horcrux hunt that would look for the items as the story unfolded.  We were looking for the diary, a ring, a locket, a cup, a diadem (or crown), a lightning bolt, and a snake.

Of course I found a few suggestions for wording for the scavenger hunt, but I'm terribly picky and wanted the hunt to not only make sense in our yard and where I could hide the items, but I wanted it to tell the story of the Horcruxes without giving away any/many spoilers.  So I set my pen to paper and wrote some poetic clues.  In the end, I was quite proud of them.

Here is the wording I came up with.


Voldemort first tempted a girl named Ginny
With his own diary, its mysteries were many.
To find out its secrets, its key to unlock,
You can look in a place where you would sit and rock.

The next one was found by old Dumbledore.
It poisoned his hand when this ring he wore.
But how to destroy it? One of the unknowns.
Now go find Gaunt’s Ring among the stones.

Another – a locket – guarded by a house elf,
Who was true to his master in spite of himself.
It got passed around by two or three.
Slytherin’s locket is hiding up in a tree.

Three friends found the next one inside a bank vault.
They made a huge mess, but it wasn’t their fault.
Getting help from a dragon, they fell on their tushes.
Helga Hufflepuff’s cup shines inside our front bushes.

The lost diadem is quite a lovely crown.
Trying to find and destroy it almost burned the school down.
In a giant pile of stuff it nearly was buried,
But you’ll find it in a place where our mail is carried.

The next horcrux made was the Dark Lord’s mistake.
Harry faced trading his life for its sake.
He meets up with Voldemort, the tension grows.
Go find a lightning bolt stored with our hose.

To end this great hunt a snake had to die.
A new hero rose, courage shone in his eye.
Could this be real? Would peace be restored?
Go find Nagini taped to the front door.

The hunt is now over. The seeking is done.
All horcruxes are found, I hope you had fun.
One more activity and the party is complete.
Go inside the house and “shop” for some sweets.


You can print this out for yourself here, but unless you have the same places to hide them that I did, I don't know if it will help you much.

As each Horcrux was found, I would read the next clue while everyone looked for it at the same time.  It wasn't a competition and anyone could find them.  It was just fun for them to look. 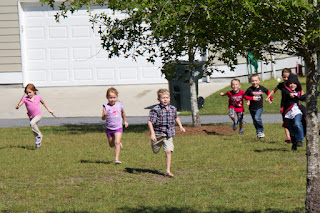 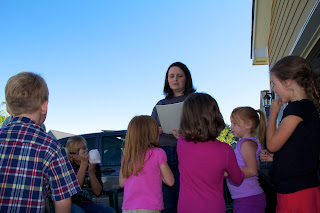 While the Horcrux Hunt was going on, I had my house elves spouse and friends inside setting up Honeydukes for a shopping extravaganza. Come back tomorrow to check that out!

If you want some more ideas, I have an entire Pinterest board dedicated to Harry Potter party ideas. Some I used and some I didn't but you might find something PERFECT for yours!
Posted by Kaye at 12:01 AM