Today is the anniversary of one of those days that everyone remembers where they were when the news reached their ears. 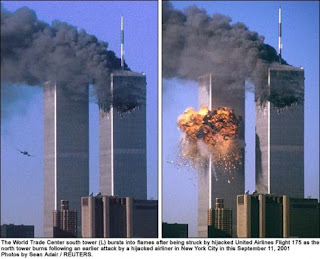 For me, I was at work.  Due to a cell phone restriction in the facility where I worked, none of the regular employees got a call from home informing us of the tragedy and ongoing drama unfolding on the televisions at home.

However, we had a technician in our building who was there to work on a piece of equipment we were having problems with.  He received the call.  He was standing next to me when the call came through.  We immediately tried to log onto a news website, but they were all jammed up with traffic and minute-by-minute breaking news updates.

I called the guy in charge of our entire facility, and he was able to get in touch with his wife.  I called Chip, who I was engage to at the time - just a month away from marrying - and we talked through his tears as he described what he was seeing live on TV.

We spoke with our company's home office, just one hour's drive from NYC, to see if we could glean any additional news, but they didn't seem to know any more than we did.

We stopped work and had a meeting with all of the employees to tell them everything we knew - everything that the news was reporting at that time.  It was a day that work continued, but not like any other day.  We were all walking around in a fog trying to wrap our minds around the horrific events that had been described to us.

We were unaware just how much life had changed. We knew our sense of what was right and what we had assumed to be true was rocked, but it would take a few days - even weeks - for us to really realize the horrors of the world we live in.  We would, however, also get to see the beauty of humanity as people opened their arms and hearts to complete strangers both next door and on the opposite side of the world.

For the sake of those lost on this day in 2001 and in the days to follow, I hope that the goodness it was endures.

Where were you on that fateful day?  What is your story?
Posted by Kaye at 8:59 AM 3 comments:

Email ThisBlogThis!Share to TwitterShare to FacebookShare to Pinterest
Labels: Life

Pants Without Pockets - WHY?!

This will be a short rant.

I have been frustrated by this situation for a while now, but I am not feeling well today, so darn it - I'm going to complain about something.

Why, oh why, do they make pants without pockets?

I have several pairs of work pants that have no pocket area (front or back) whatsoever and it drives me up the wall!

I know - some ladies carry purses to work, and frankly I do also carry one - TO work, but not around work.  I work in a manufacturing and warehouse environment and it's just not practical to carry my purse around with me all day.  What I do need though, is somewhere to stick my keys to the facility, a place to clip the radio that I have to wear, and somewhere to stick a dollar bill for when I need some caffeine in my life.

On those days that I happen to choose pants without pockets are obviously the ones when I usually end up needing them the most.

Yeah - don't remind me to look for these things while I'm shopping because I never realize I don't have pockets until I need them.

Tell me something that frustrates you today. Let's all gripe together.
Posted by Kaye at 9:54 AM 2 comments: