As a continuation of our Harry Potter party series (see previous post here), I wanted to talk to you about my favorite part of the whole affair - The Potions Class.

Let me start by saying that I have the most awesome husband on earth. Seriously.

Not only does he like Harry Potter (almost as much as Patrick and I do), but he has a bit of a man-crush on Alan Rickman's character of Severus Snape (sorry sweetie - but you really can't deny it).

So for this party and the soon-to-follow Halloween, I purchased him a Snape costume on ebay. We also bought a witch wig at Walmart and trimmed it to be about the right length. The wig was cheap (and it looked like it), but it worked well for what we needed.


So this was the most fun for most of the kids and adults. 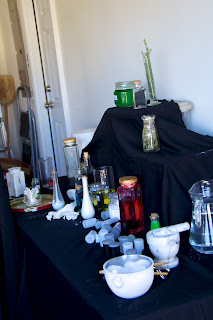 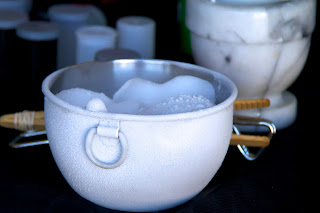 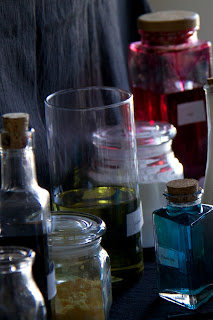 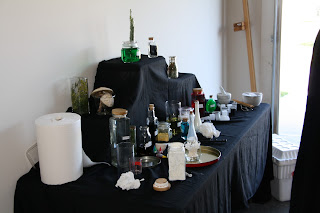 The Potions class was set up in the garage. I gathered a number of glass bottles and containers and stored various liquids and greenery found in our neighborhood in them and labeled them with Potterish names including those to be used in the potions class and demonstrations. We also purchased some dry ice, which we found at Kroger for $5 for a 5 pound bag (this was approaching Halloween, I have no idea if they normally have it).

And this sign was my favorite of all of the ones I made (and here it is for you to have). 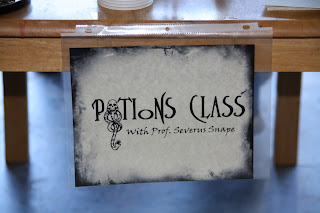 I spent lots and lots and lots of time scouring the internet for potions class ideas and do-at-home science experiments that could be done with ease but would seriously impress the kids.   I was able to use potions from The Leaky Cauldron,  It's the Life, Dirt and Sunshine, and Lemonade.  You can find even more (that I didn't use but really considered) at My Harry Potter Party, Harry Potter Birthday Party, and lots more at The Leaky Cauldron. Once I found them, I modified the ones that needed to be Potter-fied (you like that, don't you?) and created a Potions Handbook for the kids and a Potions Master Handbook for my Snape using fonts found on Mugglenet and the same parchment used for signs and invitations. They neatly folded into a booklet that the kids were allowed to take home.

The Potions Student Handbook had all of the experiments potions that the kids would participate in.  I also included an ingredients list so the kids could take them home and do them with their parents help if they wanted to (yes, a little science lesson to go home with you).  It included the following potions
The Potions Master Handbook had those items that the kids would only watch.  One was a density column and some dealt with dry ice (little hands OFF). It included the following Potions:
And yes...I'm sharing both the Potions Student Handbook and the Potions Master Handbook with you now. Hooray!

Here are some pictures of the kids and the fun from the Potions class. 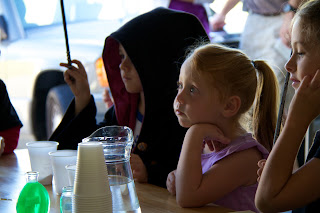 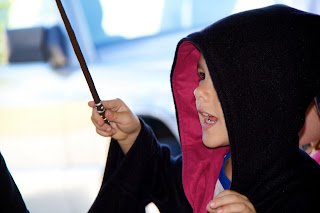 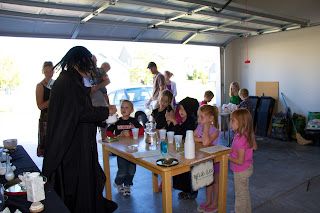 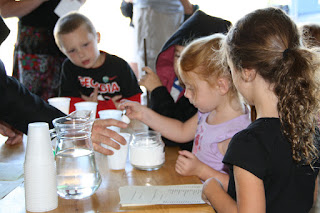 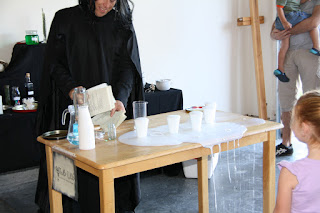 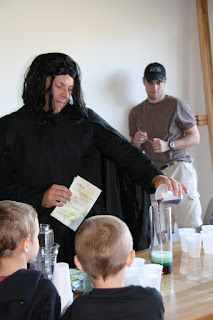 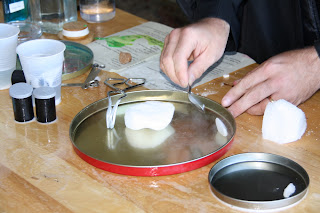 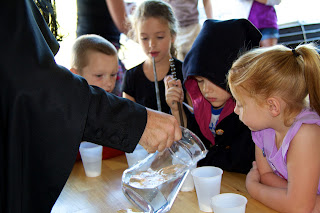 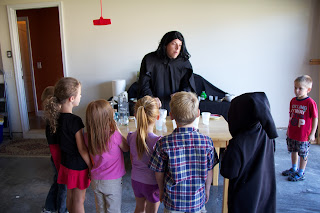 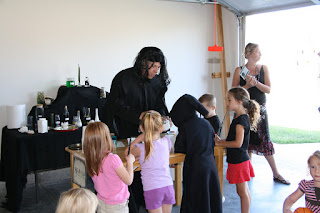 If you want some more ideas, I have an entire Pinterest board dedicated to Harry Potter party ideas. Some I used and some I didn't but you might find something PERFECT for yours! Tomorrow we'll cover the food and drinks!
Posted by Kaye at 12:02 AM